Cast of U: The Comedy of Global Warming | Tivo 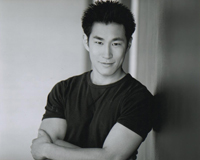 Tim is a graduate of the University of Alberta B.F.A. class of 2000 and is proud to be making his professional theatrical debut in U: The Comedy of Global Warming.  Happy to be back in his hometown after seven years in Toronto, Tim currently finds himself alternating between pursuing his passion for writing, commuting to Vancouver to voice cartoons, and chasing short people around his house.  Right now he has a film script, Journeyman, in development with Corus Entertainment, is the co-lead in the upcoming animation series Zeke’s Pad for YTV, and the lead in the newly developed series Subterrainea for Nerd Corps Entertainment.  Tim sends much love to his beautiful wife Yen and his two little lovelies, Skylar and Morgan, and thanks them for their undying support whenever Daddy goes off to the world of make-believe.