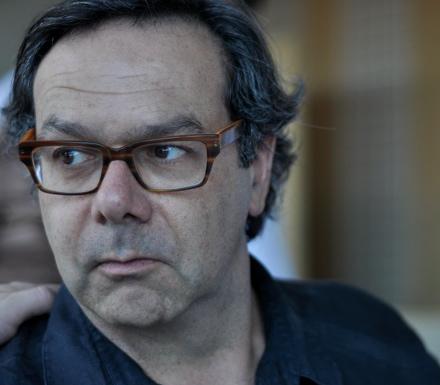 Leading up to our October of 2014 production of Proud, the third and final play in his trilogy about Canadian societal virtues (it was preceded by Generous and Courageous), Michael Healey kindly agreed to answer a few questions I sent him via e-mail.  It was my hope to use the resulting Q&A as an opening night blog post.  Things got away on me (as they will in the final days before an opening) and the entry was never published.

A lot of water has gone under the bridge since 2014, but here for the record is the Q&A.  I’ve edited my too-long questions slightly, but Michael’s succinct answers remain intact.

Ian Leung: I read that your motivation to write a trilogy about Canadian societal virtues came out of donating part of your liver to playwright Tom Walmsley, an act which, in itself was generous, courageous, and something to be proud of.  Can you expand on how that event inspired you to create the trilogy, and how that inspiration led to Proud?

Michael Healey: You do such a great job of answering this yourself in the director’s notes. All I can say is that having decided to engage with federal politics as an extension of the investigation of what we owe each other, Harper’s actions seemed more and more radical, while covered in milquetoast.

IL:  How do you see the virtue of pride expressed in our society, and why do you – at least in the trilogy – treat it as one of the top three?  (Also, and this is optional, are there virtues that didn’t make the cut?  What are they and why?)

MH: It’s all Ford all the time here in Toronto, so maybe it’s not surprising that my first example of societal pride is the degree to which some of the population of Toronto is proud of Rob Ford. The ownership people feel over him is a kind of enfranchisement, a kind of pride. You see lots of engagement, volunteerism etc thanks to the Ford saga, actually. I personally donated money to a mayoral campaign for the first time in my life, because I feel ownership toward my city.

Canadians love their country. I see it everywhere. Sometimes, it gets expressed in a hilarious local way — I’ve had people in one city say that while they enjoy politically engaging material, it probably won’t work in another city – Victorians worried Proud would bore Vancouverites.

What we do seem to resist on a cellular lever is jingoism. And most kinds of sentiment.

IL: Why did you feel it was necessary to your discussion of what “we want of our politicians” and, your attempt to “to get as close to understanding Stephen Harper’s behaviour as much as possible” to take the risk of doing so by creating a character that was so unambiguously like him – even to the point of naming him in the last speech of the play – instead of opting to write a more veiled critique as, say, Arthur Miller did with The Crucible?

MH: I’ve said before that I don’t have the skill or patience of a Miller — that constructing an allegory instead of speaking directly about current circumstances was something I couldn’t sit still long enough to do. But also, the goal here is different — I want to investigate more general questions of citizenship by using specific contemporary events.

IL: Jake loves to cook and donated part of his liver to his mother.  You yourself, I understand, are an excellent cook, and of course you donated part of your liver to Tom Walmsley.  Are we meant to understand Jake’s voice as your own or was it more the case that those aspects of your life seem appropriate to lend to the character?

MH: More the second. Cooking confirms a kind of personal autonomy for me, like it does for Jake. It seems right to end the trilogy the way it began for me, with the fallout from a liver donation, so there’s that symmetry. But mostly, I like the idea these two emotionally compromised Straussians (Harper and Lyth) could create a truly idealist progressive.

IL: Where does the idea that a smaller debt-to-GDP ratio can lead to greater happiness because it can increase public engagement and raise the level of political debate come from, and why did you choose to focus on that as the Prime Minister’s central motivation for getting into politics?

MH: I can’t remember at this distance where in my research the concept of fiscal conservatism leading to societal engagement and freedom comes from. That idea being (my) Harper’s primary motive comes from his earliest writing, including his Civitas speech. The real Harper’s motives are of course much more complex (and opaque).

MH: I guarantee he wouldn’t see it that way. He’d say there was a entire portion of the electorate that wasn’t being heard. That debate in the country was occurring among only central Canadian elites, and that rebalancing power away from Ontario/Quebec and toward Western Canada has been a breath of fresh air. And of course he’d say that there’s a big difference between a government carefully controlling its message and stifling debate.

IL: There’s a strong streak of Shaw in the play: a Pygmalion-esque plot; a protagonist who is not what he initially seems and whose arguments are forcefully convincing (Undershaft from Major Barbara comes to mind); and of course you also adapted On the Rocks.  How has Shaw influenced your work, and what would you say to those who dismiss his plays as overly talky?  Whom else do you consider an influence on your work?

MH: Shaw taught me that talk and drama don’t exclude each other. That a long scene can be as dramatic as a long hike. And just to confirm how self-involved I am, I’ll answer the influences question by saying my greatest influence is whatever problems I felt I failed to resolve in my last play.

IL: What can we look forward to from you next?

MH: A play about the last honourable moment in Canadian politics — the failure of Joe Clarks’ government in 1979.

PS: did I ever tell you where Jisbella Lyth comes from?  She was the postmistress in the village Shaw lived in at the end of his life. He wrote Village Wooing about her.